A Trip Around The World From The Cozy Suburbs 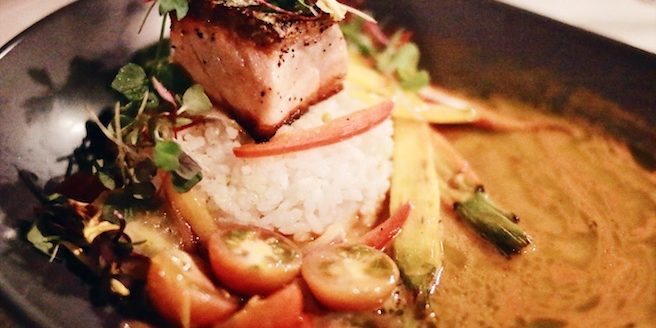 When I drove up to Served I got lost. I am useless with or without GPS. I was using advanced technology and still got lost. Too bad “directions” wasn’t on the menu, but what was being served at Served took me on a journey of cultural discovery.

Technically I didn’t get lost. To get there is a thing of discovery in itself. Served is hidden next to McDonald Highlands behind near the shopping strip in Green Valley. My mother hides her best añejo tequila and it’s always as good as her hiding places, so this journey to finding Served was off to a good start.

“I think that being the only place with the lights on must be Served,” I pointed. “Just do a U-turn. Do you think they stayed past operation hours for you,” said my dining mate and cousin who saved me from eating alone. “Don’t tell me that.”

The tall man peeking by the entrance of Served was probably waiting for any signs of me. It was 7:50 p.m. when I finally pulled up. He quickly tucked his body back in. My reservations were at eight. I like to be 10 minutes early because coordinates, but primarily because I like to go unnoticed. Get in and get out. I’m the most extroverted introverted Leo you’ll ever meet.

This day was built to eat and I was going to do it in the name of science. A plate of mashed potatoes was served and I, being a woman, thought, about my waistline. How uncultured of me. It was parsnip. My waistline could kiss the chef if it wasn’t attached to my body. I was busy devouring the purée served underneath the “Togarashi Crusted Ahi Tuna” in yuzu soy garlic. What greater comparison could I make than to the American favorite comfort food mashed potatoes. But ladies and gentlemen, there is tragedy in all of this. I didn’t ask for more. I had about a million plates to go.

I’m kind-of offended at the dignity in which the “Salmon Panang” was served: on a bed of garlic fried rice, neatly sliced tomatoes with a rich lake of spicy panang curry, squash, bell pepper, and spinach. I am not a fan of spicy anything yet I couldn’t stop envisioning how badly I wanted to bring this plate to my mouth and sip despite the runny nose and teary eyes. As if he was reading my mind, and wanting to help me from public humiliation, the server brought out two shiny silver spoons.

“What country are we going to next,” I asked her. My cousin raised her eyebrows and eyes widened as she finished up the “Thai Tuna Poke”. “Do I eat the flowers, too?” I nearly sent her away on an Uber to the nearest McDonald’s where she first lost her taste buds at age 12 months.

For being such a picky eater, she sure as hell wouldn’t stop chomping her teeth through the dinner, though. I tried to make conversation, but saw I was distracting the personal journey her taste buds were on in helping resurrect any last bit of decent receptor cell. She was on a cultural journey as much as I was. A fine-dining experience in the suburbs, who comes up with that?

She took one look at the “6oz Filet” placed on top of a wild mushroom cognac sauce with a roasted herb potato and sautéed carrots to the side, and hoped it would never stop.

“There’s one way to make that last you know? Cut micro-sized pieces and chewed slowly.” She flips me off.

I’m plotting an escape. “Make room for dessert! We have three coming out soon.” But first, here comes the veal.

Say this out loud to yourself, “During a tasting, do not eat everything on your plate.” But I’m not one for rules and I more often than not bend them. Now I’ll be honest, my cousin was not a fan of the veal, but then again understand her taste buds have been plagued by fast food restaurants and frozen bar wings. We must forgive and mourn her loss of taste. A moment of silence, if you will.

“You don’t know what you’re eating! It’s veal,” I exaggerated hoping the emphasizing of this luxurious dish would knock some sense of what she was passing up for consumption. Didn’t work, but she did eat the risotto. “Didn’t you make me risotto once?”

Surprised to see veal on the menu and now in front of my face, I pierced my fork and knife through. It neatly and softly sliced off, stayed on my fork on its way pass my teeth. It was tender. The risotto was velvet–complimented the veal very, very well.

The desserts were French inspired except the off-the-menu trial avocado ice cream, which was a nice surprise. “Creme Brulee with Fresh Berries,” was baked to bronze perfection. And, the “Crispy Berry Bread Pudding” with almonds, powdered sugar, whip and ice cream nearly sent my dinner-mate off into a panic of joy. Can’t expect anything less from the acting chef who had hard previously worked at Bouchon, but I was confused. What exactly is this restaurant going for? Filipino? Indian? French?

The server had mentioned something earlier about being Filipino and his tip and preferred method on eating one of the Filipino-inspired dishes we were having. I realized then Served is a restaurant that serves cultural favorite dishes with fine-dining cooking and taste, minus the dress code and high prices. Disregard the portions on the images. Remember this was a tasting. Portions at Served are large. Hidden places always over-deliver.

The outcome was a journey around the world from the hidden restaurant behind a suburban family strip mall. Disregard the GPS. My map was my server and my final destination was stuffed with a box of the leftover desserts to go.

Henderson Breakfast-Lunch Spot Served Does it all and Then Some
February 28, 2020

Henderson’s Served gets creative with breakfast and lunch
February 28, 2020

5 egg Benedicts to get for Easter weekend in Las Vegas
February 28, 2020